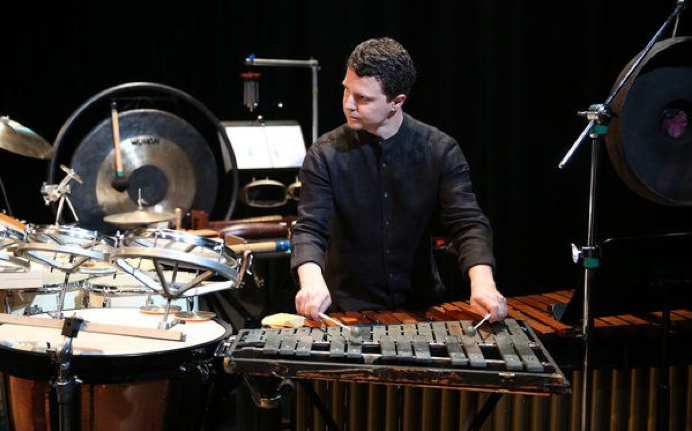 Justin DeHart is a GRAMMY-nominated performer of contemporary musical styles – from classical to pop, and from world to electronic.  DeHart’s musical resume includes performances with the San Diego symphony, pipa master Wu Man, and various pop legends, including Cheap Trick.  DeHart is a member of the critically acclaimed Los Angeles Percussion Quartet (LAPQ) and is an active freelancer in Southern California. His debut solo album entitled Strange Paths on Innova Recordings (works by Brian Ferneyhough, Iannis Xenakis, Michael Gordon and Stuart Saunders Smith) was lauded as “mesmerizing” by Percussive Notes for his “palette of sounds and intricate weaving of lines.”

DeHart was awarded a Fulbright Scholarship for percussion studies in India (2001-02) and his talents have been featured at concerts around the globe.  As a California native, he holds a B.M. from CSU Sacramento, a M.F.A. from California Institute of the Arts, and a D.M.A. from UC San Diego.  He currently lives in Anaheim, CA and teaches music at Chapman University Conservatory of Music and UC Riverside.  Justin DeHart is a Yamaha Performing Artist and an endorser of Black Swamp Percussion, REMO, Sabian, and Innovative Percussion Inc.